“What I’m looking for isn’t flexible bodies, but flexible brains. What I’m after is to restore each person to their human dignity.”

This is an exciting time to become a Feldenkrais Practitioner. As the field of neuroscience is revealing more and more about our brain’s extraordinary ability to learn and adapt, we are noticing a remarkable thing: Many of the most compelling research findings today were actually anticipated by physicist, martial artist and teacher Moshe Feldenkrais more than 50 years ago. This “new” research is turning some of our old beliefs about the brain…on their head. But Moshe Feldenkrais and the many teachers of the Feldenkrais Method® around the world have known this for quite a while: Our actions are shaped by our learning, which also shapes who we are, in a continuous cycle of action and learning that literally changes our brain’s structure (this is called neuroplasticity). And by engaging our attention and our movement in very specific ways using the Feldenkrais Method®, we can actually “build” a smarter and more flexible brain—and thus become smarter and more flexible human beings.

“Feldenkrais is not just pushing muscles around, it’s changing things in the brain itself.”

Feldenkrais practitioners come from all walks of life, bringing the Feldenkrais Method® into such diverse fields as psychology, rehabilitation, physical and occupational therapy, education, ergonomics, gerontology, sports performance, art, voice, theater, dance and music, to name just a few. Some people are looking to bring new perspectives to their work, some are interested in improving their own health and well-being. Others are making a new career teaching the Feldenkrais Method®. 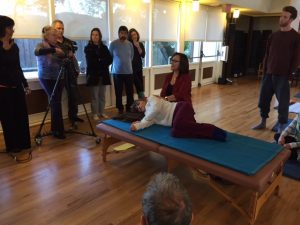 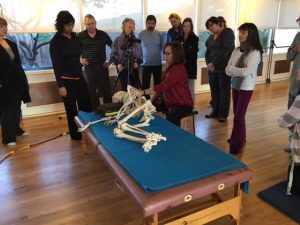 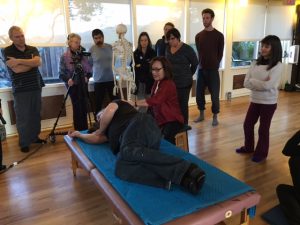 At the basis of the Optimal Moves Feldenkrais Teacher Training is a concern with “learning to learn.” The training will expose students to a variety of modes of learning, not only through Awareness-Through-Movement® (ATM) and Functional Integration® (FI) lessons, but also through structured demonstrations, practice sessions involving classmates and/or outsiders, small-group discussions, lectures, videos, readings, and writings and exercises designed to encourage reflection. Over the 4-year program, students will engage with the lessons of the Feldenkrais Method both to learn about themselves and how they learn and also as something to learn and to teach to others.

All of the skills and abilities to be developed by the end of the training, such as learning to observe oneself or learning about another through touch, will be introduced in Year 1. The three years that follow will consist of increasingly refined variations that reveal the complexities and subtleties of these themes, as the main aspects of the work are brought into play in ATM and in FI, with oneself and others, in class and in the outside world. Through repetition and experience, students will become familiar with themselves and their actions, thereby increasing their comfort with and openness to greater challenges. They will learn how their own continued learning is the path to greater teaching.

The training thus aims to offer a coherent set of experiences that will foster each student’s growth without becoming formulaic; specifics will depend on the group. At the end of the training, trainees should be certifiably competent to teach ATM and FI, and will be open and able to direct their own continued learning